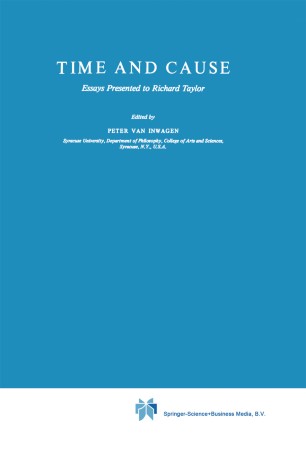 Richard Taylor was born in Charlotte, Michigan on 5 November 1919. He received his A. B. from the University of illinois in 1941, his M. A. from Oberlin College in 1947, and his Ph. D. from Brown University in 1951. He has been William H. P. Faunce Professor of Philosophy at Brown University, Professor of Philosophy (Graduate Faculties) at Columbia University, and Professor of Philosophy at the University of Rochester. He is the author of about fifty articles and of five philosophical books. This volume consists of essays presented to Richard Taylor on the occa­ sion of his sixtieth birthday. Some of the contributors have been Taylor'S students; some have been his colleagues; and all have been, and continue to be, his admirers. I have made several attempts to articulate what it is I (I would not presume to speak for anyone else) admire about Richard Taylor: (1) There is a particular 'flavor' to Taylor's philosophical writing and con­ versation that is wholly delightful. Like any other flavor, it can be tasted and enjoyed and remembered but never adequately described. (If there should be someone who has picked up this book who does not know what I mean, I recommend that he read the chapter on 'God' in Taylor's Metaphysics. ) (2) Taylor is a masterful dialectician.