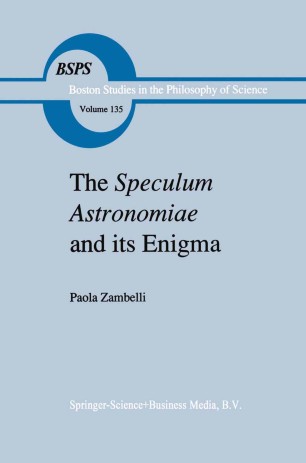 The Speculum Astronomiae and Its Enigma

Astrology, Theology and Science in Albertus Magnus and his Contemporaries

Part of the Boston Studies in the Philosophy of Science book series (BSPS, volume 135)

The attribution of the Speculum Astronomiae to Albertus Magnus became a controversial issue only recently, when the great neo-Thomist historian Pierre Mandonnet suggested -- without any antecedents -- that the author was Roger Bacon rather than Albert. Mandonnet's theses were refuted by Lynn Thorndike and have since then been the subject of widespread discussion.
The present historiographical case-study considers this debate in the light of an analysis of texts by Albert himself, as well as other important authors, such as Bacon, Bonaventura, Thomas Aquinas, Witelo, Campanus of Novara, and others, which shows how widespread the general concept of the influence of the stars and other astrological ideas to be found in the Speculum were. Most of the scientific ideas of the Middle Ages were based on principles derived from the notion of celestial influence and its consequences. The Speculum drew the fundamental outlines of this discipline into a theoretical and bibliographical introduction -- no small achievement -- and was consequently greeted with great interest and used as a standard reference book for many centuries. Set against the background of discussions taking place in the 1260s, within the Dominican Order as well as in the Faculties of Arts, Zambelli removes all doubt that the Speculum was written by Albert, possibly with some collaboration.