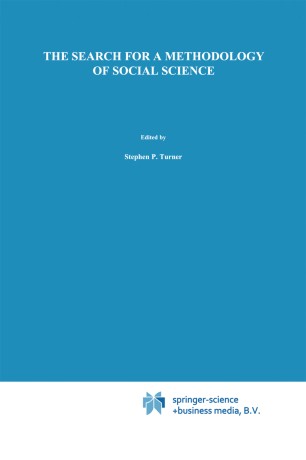 The Search for a Methodology of Social Science

Durkheim, Weber, and the Nineteenth-Century Problem of Cause, Probability, and Action

Part of the Boston Studies in the Philosophy of Science book series (BSPS, volume 92)

Stephen Turner has explored the ongms of social science in this pioneering study of two nineteenth century themes: the search for laws of human social behavior, and the accumulation and analysis of the facts of such behavior through statistical inquiry. The disputes were vigorously argued; they were over questions of method, criteria of explanation, interpretations of probability, understandings of causation as such and of historical causation in particular, and time and again over the ways of using a natural science model. From his careful elucidation of John Stuart Mill's proposals for the methodology of the social sciences on to his original analysis of the methodological claims and practices of Emile Durkheim and Max Weber, Turner has beautifully traced the conflict between statistical sociology and a science offactual description on the one side, and causal laws and a science of nomological explanation on the other. We see the works of Comte and Quetelet, the critical observations of Herschel, Buckle, Venn and Whewell, and the tough scepticism of Pearson, all of these as essential to the works of the classical founders of sociology. With Durkheim's essay on Suicide and Weber's monograph on The Protestant Ethic, Turner provides both philosophical analysis to demonstrate the continuing puzzles over cause and probability and also a perceptive and wry account of just how the puzzles of our late twentieth century are of a piece with theirs. The terms are still familiar: reasons vs.