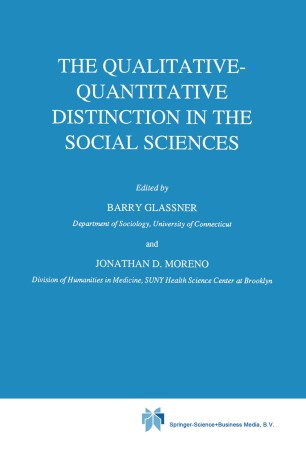 The Qualitative-Quantitative Distinction in the Social Sciences

Part of the Boston Studies in the Philosophy of Science book series (BSPS, volume 112)

Without of course adopting a Platonic metaphysics, the eighteenth-century philosophes were Grecophiles who regarded the Athenian philosophers as their intellectual forbearers and mentors. So powerful was their identification with c1assification that ancient ideas were taken as keys to the design of the modem world, but usually the ideas were taken separately and as divided from their systematic context. The power of number was an idea the En­ lightenment thinkers deployed with their legendary passion and vigor, particularly as an instrument for social reconstruction. It is no exaggemtion to say that the role of quantities in contemporary social scientific theorizing cannot be understood with any depth absent a recollection of the philosophes' axial development of the notion of quantification. It is a commonplace that for the philosophes progress required releasing human abilities to have power over nature. Aprerequisite for this power was knowledge of the underlying causes of natural events, knowledge that required quantitative precision. Enlightenment thinkers were sufficiently aware of themselves as products of their time to appreciate the importance of a liberal social environment to the knowledge enterprise; the supposition that the reverse is also the case, that enhanced knowledge could advance social conditions, came easily.