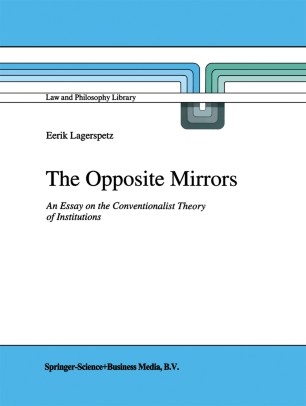 An Essay on the Conventionalist Theory of Institutions

How do social institutions exist? How do they direct our conduct? The Opposite Mirrors defends the thesis that the existence of institutions is a conventional matter. Ultimately they exist because we believe in their existence, and because they play a role in our practical reasoning. Human action necessarily has an unpredictable aspect; human institutions perform an important task by reducing uncertainty in our interactions. The author applies this thesis to the most important institutions: the law and the monetary system. In his analysis he connects many traditional topics of the philosophy of law, social philosophy and the philosophy of social sciences in a new way. He discusses the nature of rules, authority, and power and analyzes the Hobbesian presuppositions which have been dominant in legal theory and in the economic analyses of the state.
The book is written for legal theorists as well as for political and social philosophers, and theoretically oriented social scientists.