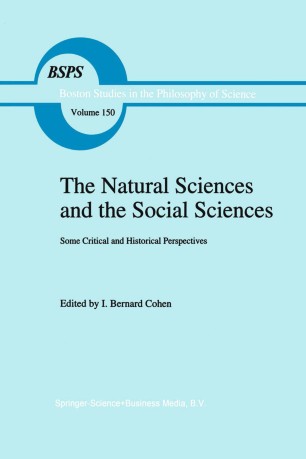 Some Critical and Historical Perspectives

Part of the Boston Studies in the Philosophy of Science book series (BSPS, volume 150)

Natural Sciences and the Social Sciences contains a series of explorations of the different ways in which the social sciences have interacted with the natural sciences. Usually, such interactions are considered to go only `one way': from the natural to the social sciences. But there are several important essays in this volume which show how developments in the social sciences have affected the natural sciences - even the `hard' science of physics. Other essays deal with various types of interaction since the Scientific Revolution.
In his general introductory chapter, Cohen sets some general themes concerning analogies and homologies and the use of metaphors, drawing specific examples from the use of concepts of physics by marginalist economists and of developments in the life sciences by organismic sociologists. The remaining chapters, which explore the different ways in which the social sciences and the natural sciences have actually interacted, are written by leaders in the field of history of science, drawn from a wide range of countries and disciplines.
The book will be of great interest to all historians of science, philosophers interested in questions of methodology, economists and sociologists, and all social scientists concerned with the history of their subject and its foundations.