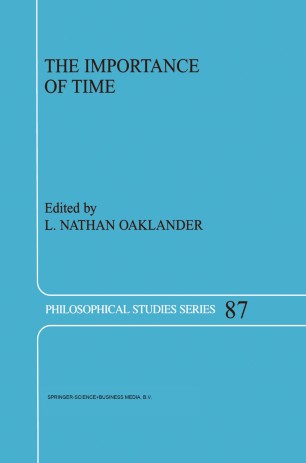 The Importance of Time

The Philosophy of Time Society grew out of a National Endowment for the Humanities Summer Seminar on the Philosophy of Time offered by George Schlesinger in 1991. The members of that seminar wanted to promote interest in the philosophy of time and Jon N. Turgerson offered to become the first Director of the society with the initial costs underwritten by the Drake University Center for the Humanities. Thus, the Philosophy of Time Society (PTS) was formed in 1993. Its goal is to promote the study of the philosophy of time from a broad analytic perspective, and to provide a forum as an affiliated group with the American Philosophical Association, to discuss the issues in and related to the philosophy of time. The society held its first meeting during the Eastern Division of the AP A in Atlanta, George, in December 1993. In 1997 I began my tenure as Executive Director of PTS and with my term ending in 2000, I decided to put together a volume of selected papers read at PTS meetings over the years. The result is the present volume. It contains some of the latest developments in the field, including discussions of recent books by Michael Tooley, Time, Tense, and Causation, and D. H. Mellor, Real Time II, and much more. The main issue in the philosophy of time is and remains the status of temporal becoming and the passage of time.