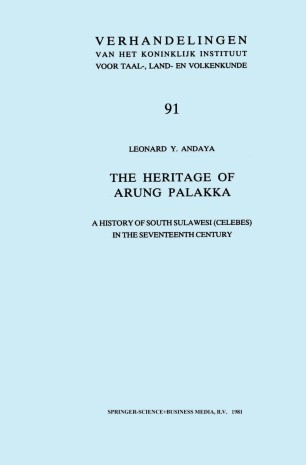 A History of South Sulawesi (Celebes) in the Seventeenth Century

to use the Dutch presence to institute far-reaching innovations in his society. It became apparent that, while the Company's initial involve­ ment with South Sulawesi had required some military action, its sub­ sequent activities were often limited to that of arbiter in local disputes. Y et its approval was an essential element without which no local prince could exercise authority confidently. The reputation of the Company helped to sustain its position and that of anyone fortunate or clever enough to become linked with it. Arung Palakka's repeated references throughout his life to this link served a dual purpose: it reaffirmed his continuing devotion and loyalty to the Company, while reminding the people of South Sulawesi of the weapon which he could wield if neces­ sary to maintain power. Bearing the Company's trust as a right, Arung Palakka was able to introduce changes with little real opposition from within South Sulawesi. The Company has often been blamed for radical innovations in Malay-Indonesian societies, but as this study shows, in South Sulawesi at least the initiative clearly carne from a local ruler. Only research in other areas influenced by the Company's presence will demonstrate whether or not the South Sulawesi experience was unique. A secondary but nonetheless important reason for this study was to examine the roots of the large scale emigrations from South Sulawesi in the second half of the 17th century.