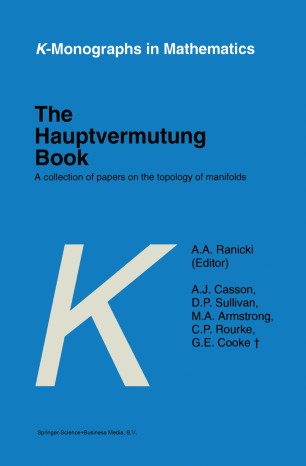 A Collection of Papers of the Topology of Manifolds

Part of the K-Monographs in Mathematics book series (KMON, volume 1)

The Hauptvermutung is the conjecture that any two triangulations of a poly­ hedron are combinatorially equivalent. The conjecture was formulated at the turn of the century, and until its resolution was a central problem of topology. Initially, it was verified for low-dimensional polyhedra, and it might have been expected that furt her development of high-dimensional topology would lead to a verification in all dimensions. However, in 1961 Milnor constructed high-dimensional polyhedra with combinatorially inequivalent triangulations, disproving the Hauptvermutung in general. These polyhedra were not manifolds, leaving open the Hauptvermu­ tung for manifolds. The development of surgery theory led to the disproof of the high-dimensional manifold Hauptvermutung in the late 1960's. Unfortunately, the published record of the manifold Hauptvermutung has been incomplete, as was forcefully pointed out by Novikov in his lecture at the Browder 60th birthday conference held at Princeton in March 1994. This volume brings together the original 1967 papers of Casson and Sulli­ van, and the 1968/1972 'Princeton notes on the Hauptvermutung' of Armstrong, Rourke and Cooke, making this work physically accessible. These papers include several other results which have become part of the folklore but of which proofs have never been published. My own contribution is intended to serve as an intro­ duction to the Hauptvermutung, and also to give an account of some more recent developments in the area. In preparing the original papers for publication, only minimal changes of punctuation etc.