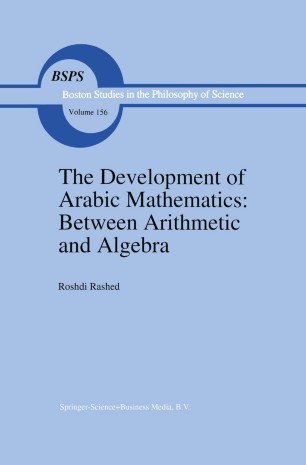 The Development of Arabic Mathematics: Between Arithmetic and Algebra

Part of the Boston Studies in the Philosophy of Science book series (BSPS, volume 156)

An understanding of developments in Arabic mathematics between the IXth and XVth century is vital to a full appreciation of the history of classical mathematics. This book draws together more than ten studies to highlight one of the major developments in Arabic mathematical thinking, provoked by the double fecondation between arithmetic and the algebra of al-Khwarizmi, which led to the foundation of diverse chapters of mathematics: polynomial algebra, combinatorial analysis, algebraic geometry, algebraic theory of numbers, diophantine analysis and numerical calculus. Thanks to epistemological analysis, and the discovery of hitherto unknown material, the author has brought these chapters into the light, proposes another periodization for classical mathematics, and questions current ideology in writing its history.
Since the publication of the French version of these studies and of this book, its main results have been admitted by historians of Arabic mathematics, and integrated into their recent publications. This book is already a vital reference for anyone seeking to understand history of Arabic mathematics, and its contribution to Latin as well as to later mathematics. The English translation will be of particular value to historians and philosophers of mathematics and of science.