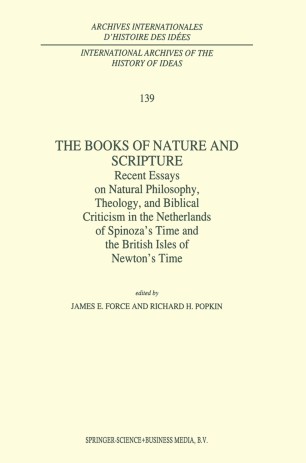 The Books of Nature and Scripture: Recent Essays on Natural Philosophy, Theology and Biblical Criticism in the Netherlands of Spinoza’s Time and the British Isles of Newton’s Time

Dick Popkin and James Force have attended a number of recent conferences where it was apparent that much new and important research was being done in the fields of interpreting Newton's and Spinoza's contributions as biblical scholars and of the relationship between their biblical scholarship and other aspects of their particular philosophies.
This collection represents the best current research in this area. It stands alone as the only work to bring together the best current work on these topics. Its primary audience is specialised scholars of the thought of Newton and Spinoza as well as historians of the philosophical ideas of the late seventeenth and early eighteenth centuries.