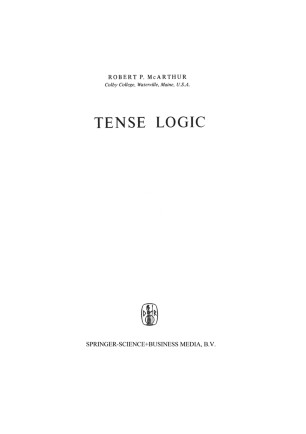 This monograph is designed to provide an introduction to the principal areas of tense logic. Many of the developments in this ever-growing field have been intentionally excluded to fulfill this aim. Length also dictated a choice between the alternative notations of A. N. Prior and Nicholas Rescher - two pioneers of the subject. I choose Prior's because of the syntactical parallels with the language it symbolizes and its close ties with other branches of logi­ cal theory, especially modal logic. The first chapter presents a wider view of the material than later chapters. Several lines of development are consequently not followed through the remainder of the book, most notably metric systems. Although it is import­ ant to recognize that the unadorned Prior-symbolism can be enriched in vari­ ous ways it is an advanced subject as to how to actually carry off these enrichments. Readers desiring more information are referred to the appropri­ ate literature. Specialists will notice that only the first of several quantifi­ cational versions of tense logic is proven complete in the final chapter. Again constraints of space are partly to blame. The proof for the 'star' systems is wildly complex and at the time of this writing is not yet ready for publi­ cation.