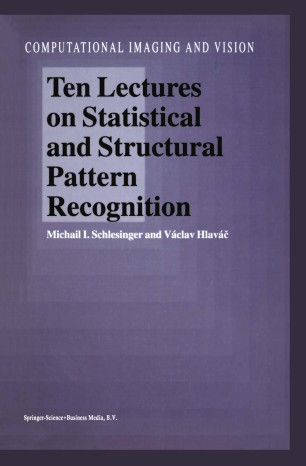 Preface to the English edition This monograph Ten Lectur,es on Statistical and Structural Pattern Recognition uncovers the close relationship between various well known pattern recognition problems that have so far been considered independent. These relationships became apparent when formal procedures addressing not only known prob­ lems but also their generalisations were discovered. The generalised problem formulations were analysed mathematically and unified algorithms were found. The book unifies of two main streams ill pattern recognition-the statisti­ cal a11d structural ones. In addition to this bridging on the uppermost level, the book mentions several other unexpected relations within statistical and structural methods. The monograph is intended for experts, for students, as well as for those who want to enter the field of pattern recognition. The theory is built up from scratch with almost no assumptions about any prior knowledge of the reader. Even when rigorous mathematical language is used we make an effort to keep the text easy to comprehend. This approach makes the book suitable for students at the beginning of their scientific career. Basic building blocks are explained in a style of an accessible intellectual exercise, thus promoting good practice in reading mathematical text. The paradoxes, beauty, and pitfalls of scientific research are shown on examples from pattern recognition. Each lecture is amended by a discussion with an inquisitive student that elucidates and deepens the explanation, providing additional pointers to computational procedures and deep rooted errors.