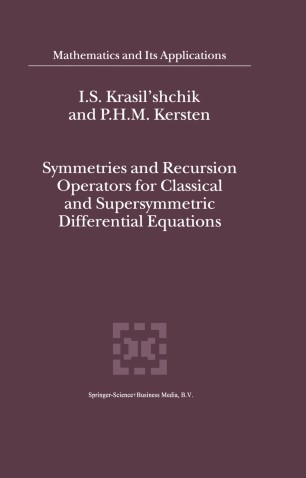 Symmetries and Recursion Operators for Classical and Supersymmetric Differential Equations

Part of the Mathematics and Its Applications book series (MAIA, volume 507)

To our wives, Masha and Marian Interest in the so-called completely integrable systems with infinite num­ ber of degrees of freedom was aroused immediately after publication of the famous series of papers by Gardner, Greene, Kruskal, Miura, and Zabusky [75, 77, 96, 18, 66, 19J (see also [76]) on striking properties of the Korteweg-de Vries (KdV) equation. It soon became clear that systems of such a kind possess a number of characteristic properties, such as infinite series of symmetries and/or conservation laws, inverse scattering problem formulation, L - A pair representation, existence of prolongation structures, etc. And though no satisfactory definition of complete integrability was yet invented, a need of testing a particular system for these properties appeared. Probably one of the most efficient tests of this kind was first proposed by Lenard [19]' who constructed a recursion operator for symmetries of the KdV equation. It was a strange operator, in a sense: being formally integro-differential, its action on the first classical symmetry (x-translation) was well-defined and produced the entire series of higher KdV equations; but applied to the scaling symmetry, it gave expressions containing terms of the type J u dx which had no adequate interpretation in the framework of the existing theories. It is not surprising that P. Olver wrote "The de­ duction of the form of the recursion operator (if it exists) requires a certain amount of inspired guesswork. . . " [80, p.