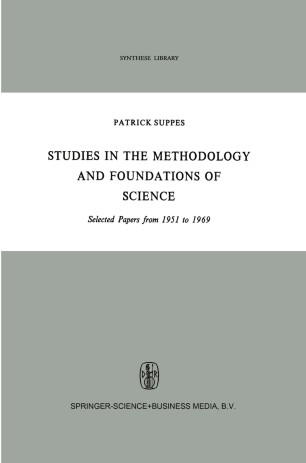 Studies in the Methodology and Foundations of Science

The twenty-three papers collected in tbis volume represent an important part of my published work up to the date of this volume. I have not arranged the paper chronologically, but under four main headings. Part I contains five papers on methodology concerned with models and measurement in the sciences. This part also contains the first paper I published, 'A Set of Independent Axioms for Extensive Quantities', in Portugaliae Mathematica in 1951. Part 11 also is concerned with methodology and ineludes six papers on probability and utility. It is not always easy to separate papers on probability and utility from papers on measurement, because of the elose connection between the two subjects, but Artieles 6 and 8, even though they have elose relations to measurement, seem more properly to belong in Part 11, because they are concerned with substantive questions about probability and utility. The last two parts are concerned with the foundations of physics and the foundations of psychology. I have used the term foundations rather than philosophy, because the papers are mainly concerned with specific axiomatic formulations for particular parts of physics or of psychology, and it seems to me that the termfoundations more appropriately describes such constructive axiomatic ventures. Part 111 contains four papers on the foundations of physics. The first paper deals with foundations of special relativity and the last three with the role ofprobability in quantum mechanics.