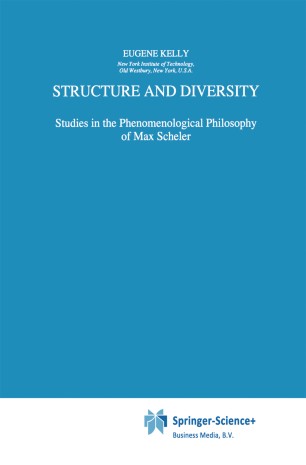 Studies in the Phenomenological Philosophy of Max Scheler

FOUNDATIONALISM IN PHILOSOPHY n his autobiographical work, The Education of Henry Adams, this I brooding and disillusioned offspring of American presidents confronted, at age sixty, his own perplexity concerning the new scientific world-view that was emerging at the end of the century. He noted that the unity of things, long guaranteed morally by the teachings of Christianity and scientifically by the Newtonian world-view, was being challenged by a newer vision of things that found only incomprehensible multiplicity at the root of the world: What happened if one dropped the sounder into the ab­ yss-let it go-frankly gave up Unity altogether? What was Unity? Why was one to be forced to affirm it? Here every­ body flatly refused help. . . . [Adams] got out his Descartes again; dipped into his Hume and Berkeley; wrestled anew with his Kant; pondered solemnly over his Hegel and Scho­ penhauer and Hartmann; strayed gaily away with his Greeks-all merely to ask what Unity meant, and what happened when one denied it. Apparently one never denied it. Every philosopher, whether sane or insane, naturally af­ firmed it. I Adams, then approaching with heavy pessimism a new century, felt instinc­ tively that, were one to attack the notion of unity, the entire edifice of human knowledge would quickly collapse. For understanding requires the unification of apparently different phenomena.