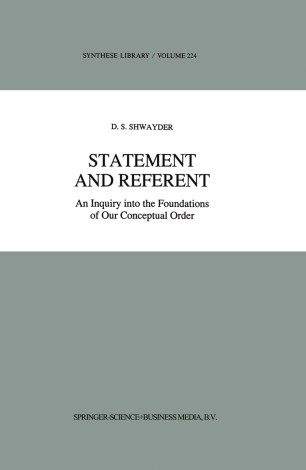 An Inquiry into the Foundations of Our Conceptual Order

There are in this volume sentences written as long ago/ as 1957. What was then projected as the third part of a modest discussion of then current issues has, through some fifteen revisions, now expanded into its own three parts. Of the project as originally conceived, the first part, itself grown too large, was published (prematurely, I now believe) in 1965 (Stratification of Behaviour). The second part, which was to be on language proper, was abandoned around 1967; such materials on language as I need for the present work are now mostly compressed into Chapter 1, with some scatterings retained in Chapters 2 and 14. My scheme discovered problems with which I have been much preoccupied. I have been less enjoyably delayed by missteps. Additions were put on and the renovations have been incessant. Even in the course of my ultimate revisions, I ran into slippery stretches and soft spots I could only gesture at repairing. But now time is running out and my energy is ebbing, and I must allow the work to come to its conclusion, with reservations certainly and not without a sense of despair. If the reception of this volume warrants, the two following parts will be wound up in what I hope may be fairly short order.