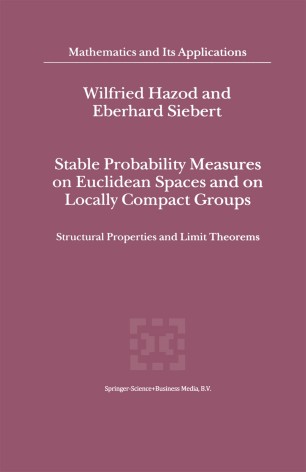 Part of the Mathematics and Its Applications book series (MAIA, volume 531)

Generalising classical concepts of probability theory, the investigation of operator (semi)-stable laws as possible limit distributions of operator-normalized sums of i.i.d. random variable on finite-dimensional vector space started in 1969. Currently, this theory is still in progress and promises interesting applications. Parallel to this, similar stability concepts for probabilities on groups were developed during recent decades. It turns out that the existence of suitable limit distributions has a strong impact on the structure of both the normalizing automorphisms and the underlying group. Indeed, investigations in limit laws led to contractable groups and - at least within the class of connected groups - to homogeneous groups, in particular to groups that are topologically isomorphic to a vector space. Moreover, it has been shown that (semi)-stable measures on groups have a vector space counterpart and vice versa.
The purpose of this book is to describe the structure of limit laws and the limit behaviour of normalized i.i.d. random variables on groups and on finite-dimensional vector spaces from a common point of view. This will also shed a new light on the classical situation. Chapter 1 provides an introduction to stability problems on vector spaces. Chapter II is concerned with parallel investigations for homogeneous groups and in Chapter III the situation beyond homogeneous Lie groups is treated. Throughout, emphasis is laid on the description of features common to the group- and vector space situation.
Chapter I can be understood by graduate students with some background knowledge in infinite divisibility. Readers of Chapters II and III are assumed to be familiar with basic techniques from probability theory on locally compact groups.