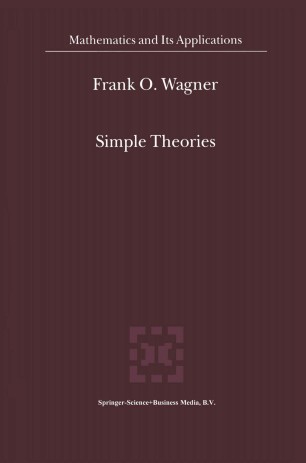 Part of the Mathematics and Its Applications book series (MAIA, volume 503)

Simplicity theory is an extension of stability theory to a wider class of structures, containing, among others, the random graph, pseudo-finite fields, and fields with a generic automorphism. Following Kim's proof of `forking symmetry' which implies a good behaviour of model-theoretic independence, this area of model theory has been a field of intense study. It has necessitated the development of some important new tools, most notably the model-theoretic treatment of hyperimaginaries (classes modulo type-definable equivalence relations). It thus provides a general notion of independence (and of rank in the supersimple case) applicable to a wide class of algebraic structures.
The basic theory of forking independence is developed, and its properties in a simple structure are analyzed. No prior knowledge of stability theory is assumed; in fact many stability-theoretic results follow either from more general propositions, or are developed in side remarks.
Audience: This book is intended both as an introduction to simplicity theory accessible to graduate students with some knowledge of model theory, and as a reference work for research in the field.