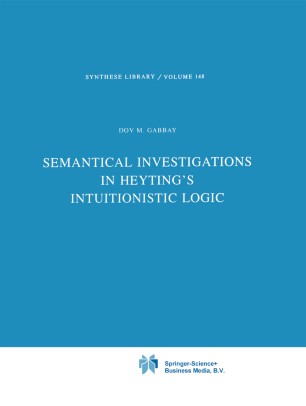 From the point of view of non-classical logics, Heyting's implication is the smallest implication for which the deduction theorem holds. This book studies properties of logical systems having some of the classical connectives and implication in the neighbourhood of Heyt­ ing's implication. I have not included anything on entailment, al­ though it belongs to this neighbourhood, mainly because of the appearance of the Anderson-Belnap book on entailment. In the later chapters of this book, I have included material that might be of interest to the intuitionist mathematician. Originally, I intended to include more material in that spirit but I decided against it. There is no coherent body of material to include that builds naturally on the present book. There are some serious results on topological models, second order Beth and Kripke models, theories of types, etc., but it would require further research to be able to present a general theory, possibly using sheaves. That would have postponed pUblication for too long. I would like to dedicate this book to my colleagues, Professors G. Kreisel, M.O. Rabin and D. Scott. I have benefited greatly from Professor Kreisel's criticism and suggestions. Professor Rabin's fun­ damental results on decidability and undecidability provided the powerful tools used in obtaining the majority of the results reported in this book. Professor Scott's approach to non-classical logics and especially his analysis of the Scott consequence relation makes it possible to present Heyting's logic as a beautiful, integral part of non-classical logics.