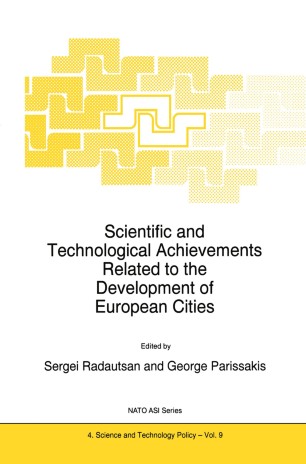 Scientific and Technological Achievements Related to the Development of European Cities

This volume features the proceedings of the NATO AR Workshop held in Kishinev, the capital of Moldova, a fom1er Soviet Republic in the South­ Eastern Europe. OUiing 3 working days 26 reports were presented, 8 of them by, or in collaboration with, speakers from Kishinev. The reports arc presented in the order they were given at the Workshop. As the topic was rather wide-ranged, all the sittings were plenmy. The opening communication was made by the Mayor of Kishinev S. Urckian, who was the Chainnan of the Organizing Committee. It was followed by other reports of general orientation. The second half of the first day was devoted to the research results and problems of the Academy of Sciences of Moldova. On the second day the Workshop was hosted by the Technical University of Moldova. At the beginning, the ceremonial sitting of its Scientific Council took place, at which two scientists were made doctors Honoris Causa of that University: Prof. K. Frolov from Russia and Prof. G.Parissakis from Greece. Then the plenary sessions continued. The round-table talk, held in the second half of the last day, appeared to be very fruitful. A relaxed and friendly atmosphere of it was appropriate for establishing closer contacts and discussing problems of mutual interest for scientists, ingineers, managerial heads and officers and businessmen.