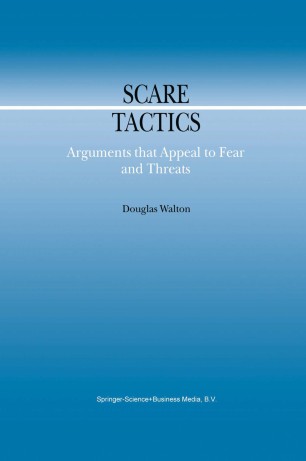 Arguments that Appeal to Fear and Threats

Scare Tactics, the first book on the subject, provides a theory of the structure of reasoning used in fear and threat appeal argumentation. Such arguments come under the heading of the argumentum ad baculum, the `argument to the stick/club', traditionally treated as a fallacy in the logic textbooks. The new dialectical theory is based on case studies of many interesting examples of the use of these arguments in advertising, public relations, politics, international negotiations, and everyday argumentation on all kinds of subjects. Many of these arguments are amusing, once you see the clever tactic used; others are scary. Some of the arguments appear to be quite reasonable, while others are highly suspicious, or even outrageously fraudulent. In addition to the examples taken from logic textbooks, other cases treated come from a variety of sources, including political debates, legal arguments, and arguments from media sources, like magazine articles and television ads. The purpose of this book is to explain how such arguments work as devices of persuasion, and to develop a method for analyzing and evaluating their reasonable and fallacious uses in particular cases. The book shows how such arguments share a common structure, revealing several distinctive forms of argument nested within each other. Based on its account of this cognitive structure, the new dialectical theory presents methods for identifying, analyzing, and evaluating these arguments, as they are used in specific cases.
The book is a scholarly contribution to argumentation theory. It is written in an accessible style, and uses many colorful and provocative examples of fear and threat appeal arguments that are suitable for classroom discussions. The matters treated will be of interest to professionals and students in law, critical thinking, advertising, speech communication, informal logic, cognitive science, rhetoric, and media studies.