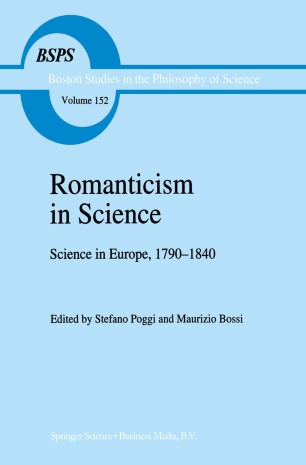 Part of the Boston Studies in the Philosophy of Science book series (BSPS, volume 152)

Romanticism in all its expression communicated a vision of the essential interconnectedness and harmony of the universe. The romantic concept of knowledge was decidedly unitary, but, in the period between 1790 and 1840, the special emphasis it placed on observation and research led to an unprecedented accumulation of data, accompanied by a rapid growth in scientific specialization. An example of the tensions created by this development is to be found in the scientists' congresses which attempted a first response to the fragmentation of scientific research.
The problem concerning the unitary concept of knowledge in that period, and the new views of the world which were generated are the subject of this book. The articles it contains are all based on original research by an international group of highly specialized scholars. Their research probes a wide range of issues, from the heirs of Naturphilosophie, to the `life sciences', and to the debate on `Baconian Sciences', as well as examining many aspects of mathematics, physics and chemistry. History of philosophy and history of science scholars will find this book an essential reference work, as well as all those interested in 19th century history in general. Undergraduate and graduate students will also find here angles and topics that have hitherto been largely neglected.