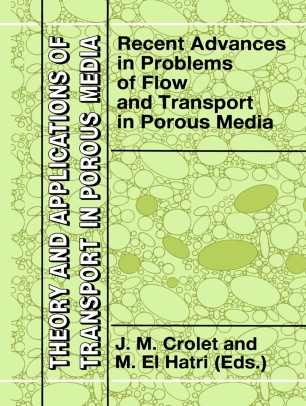 Recent Advances in Problems of Flow and Transport in Porous Media

Part of the Theory and Applications of Transport in Porous Media book series (TATP, volume 11)

Porous media, and especially phenomena of transport in such materials, are an impor1ant field of interest for geologists, hydrogeologists, researchers in soil and fluid mechanics, petroleum and chemical engineers, physicists and scientists in many other disciplines. The development of better numerical simulation techniques in combination with the enormous expansion of computer tools, have enabled numerical simulation of transport phenomena (mass of phases and components, energy etc. ) in porous domains of interest. Before any practical application of the results of such simulations can be used, it is essential that the simulation models have been proven to be valid. In order to establish the greatest possible coherence between the models and the physical reality, frequent interaction between numericians, mathematicians and the previously quoted researchers, is necessary. Once this coherence is established, the numerical simulations could be used to predict various phenomena such as water management, propagation of pollutants etc. These simulations could be, in many cases, the only financially acceptable tool to carry out an investigation. Current studies within various fields of applications include not only physical comprehension aspects of flow and energy or solute transport in saturated or unsaturated media but also numerical aspects in deriving strong complex equations. Among the various fields of applications generally two types of problems can be observed. Those associated with the pollution of the environment and those linked to water management. The former are essentially a problem in industrialized countries, the latter are a major source of concern in North-Africa.