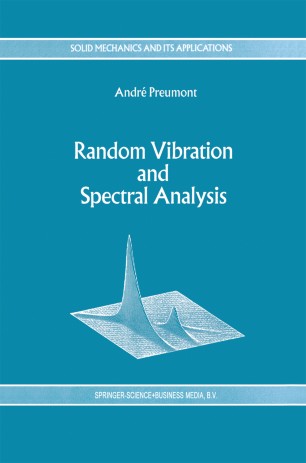 Part of the Solid Mechanics and Its Applications book series (SMIA, volume 33)

I became interested in Random Vibration during the preparation of my PhD dissertation, which was concerned with the seismic response of nuclear reactor cores. I was initiated into this field through the cla.ssical books by Y.K.Lin, S.H.Crandall and a few others. After the completion of my PhD, in 1981, my supervisor M.Gera.din encouraged me to prepare a course in Random Vibration for fourth and fifth year students in Aeronautics, at the University of Liege. There was at the time very little material available in French on that subject. A first draft was produced during 1983 and 1984 and revised in 1986. These notes were published by the Presses Poly techniques et Universitaires Romandes (Lausanne, Suisse) in 1990. When Kluwer decided to publish an English translation ofthe book in 1992, I had to choose between letting Kluwer translate the French text in-extenso or doing it myself, which would allow me to carry out a sustantial revision of the book. I took the second option and decided to rewrite or delete some of the original text and include new material, based on my personal experience, or reflecting recent technical advances. Chapter 6, devoted to the response of multi degree offreedom structures, has been completely rewritten, and Chapter 11 on random fatigue is entirely new. The computer programs which have been developed in parallel with these chapters have been incorporated in the general purpose finite element software SAMCEF, developed at the University of Liege.