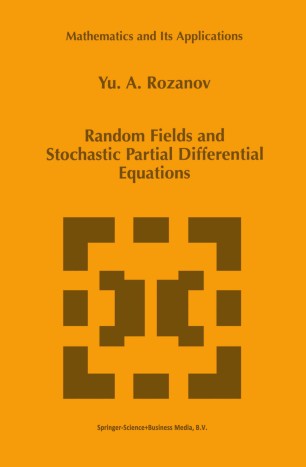 Part of the Mathematics and Its Applications book series (MAIA, volume 438)

This book considers some models described by means of partial dif­ ferential equations and boundary conditions with chaotic stochastic disturbance. In a framework of stochastic Partial Differential Equa­ tions an approach is suggested to generalize solutions of stochastic Boundary Problems. The main topic concerns probabilistic aspects with applications to well-known Random Fields models which are representative for the corresponding stochastic Sobolev spaces. {The term "stochastic" in general indicates involvement of appropriate random elements. ) It assumes certain knowledge in general Analysis and Probability {Hilbert space methods, Schwartz distributions, Fourier transform) . I A very general description of the main problems considered can be given as follows. Suppose, we are considering a random field ~ in a region T ~ Rd which is associated with a chaotic (stochastic) source"' by means of the differential equation (*) in T. A typical chaotic source can be represented by an appropri­ ate random field"' with independent values, i. e. , generalized random function"' = ( cp, 'TJ), cp E C~(T), with independent random variables ( cp, 'fJ) for any test functions cp with disjoint supports. The property of having independent values implies a certain "roughness" of the ran­ dom field "' which can only be treated functionally as a very irregular Schwarz distribution. With the lack of a proper development of non­ linear analyses for generalized functions, let us limit ourselves to the 1 For related material see, for example, J. L. Lions, E.