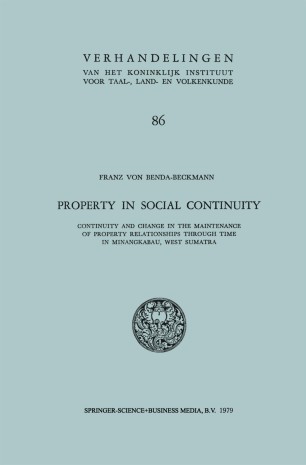 Continuity and Change in the Maintenance of Property Relationships Through Time in Minangkabau, West Sumatra

Learn the laws of inheritance and teach them to the people; for they are one half of useful knowledge. t·1ohannned (Fyzee 1955: 329) When the prophet created this aphorism he had in mind the rules of in­ heritance law revealed to him by Allah. We could apply it to social an­ thropology as well sincethe inheritance of property and the succession to positions of socio-political authority are among the most important elements of social organization. They are the vehicles of continuity which maintain property and authority through time. In many societies, and particularly in those generally studied by anthropologists, inherit­ ance and succession are closely interconnected with kinship and descent and provide the economic and political substance for the existence and continuity of kinship- or descent-based social groups. They are, as it were, the flesh on the bare bones of kinship relations. The importance of inheritance has, of course, not escaped the notice of social and legal anthropologists, and in recent years several studies have ably demonstrated the point (Radcliffe-Brown 1952, Goodenough 1951, Leach 1961 b, Goody 1962, Lloyd 1962, Gray and Gulliver (eds. ) 1964, Derrett (ed. ) 1965, Gluckman 1972, Moore 1969, Burling 1974). Yet in general, property and inheritance have rather been treated as an appendix to economic and kinship studies.