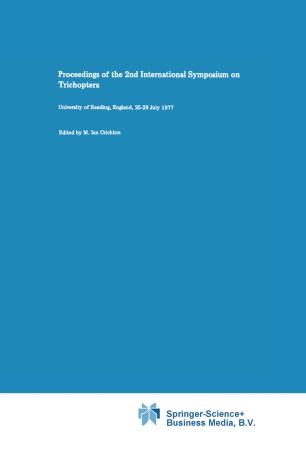 Proceedings of the 2nd International Symposium on Trichoptera

The 2nd International Symposium on Trichoptera was held at the University of Reading, England, 25-29 July 1977. It attracted 68 participants from 22 countries, which was a gratifying response to the circulation of about 250 workers on caddis­ flies. It was H. MALICKY who appreciated the need for a specialized meeting of this kind and organized the 1st International Symposium on Trichoptera, which was held at Lunz am See, Austria, 16-20 September 1974. This volume of Proceedings includes 38 papers; all except one were presented and discussed in the sessions listed in the programme. The papers were given in a lecture theatre of the Palmer Building, and demonstrations were laid out in a laboratory of the Department of Zoology where members met for their mprning and afternoon breaks. Members were accommodated in St Patrick's Hall, one of the University Halls of Residence. They were the guests of the University at an informal reception on 25 July. On the afternoon of 27 July an excursion was made to the River Lambourn at Bagnor near NeWbUry. This chalk stream has been the subject of an ecological study by a team from the Department of Zoology since 1970. The excursion was also an opportunity to see something of the local caddis fauna, and to do some collecting. The final session on 29 July, under the chairmanship of G. B. WIGGINS, was followed by a discussion on future plans.