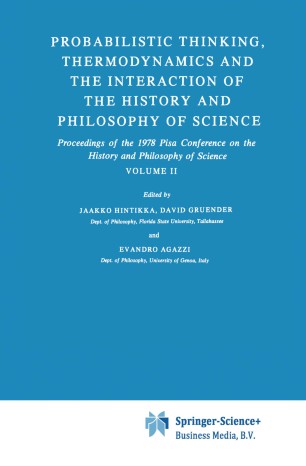 Probabilistic Thinking, Thermodynamics and the Interaction of the History and Philosophy of Science

The two volumes to which this is apreface consist of the Proceedings of the Second International Conference on History and Philosophy of Science. The Conference was organized by the Joint Commission of the International Union of History and Philosophy of Science (IUHPS) under the auspices of the IUHPS, the Italian Society for Logic and Philosophy of Science, and the Domus Galilaeana of Pisa, headed by Professor Vincenzo Cappelletti. Domus Galilaeana also served as the host institution, with some help from the University of Pisa. The Conference took place in Pisa, Italy, on September 4-8, 1978. The editors of these two volumes of the Proceedings of the Pisa Conference acknowledge with gratitude the help by the different sponsoring organizations, and in the first place that by both Divisions of the IUHPS, which made the Conference possible. A special recognition is due to Professor Evandro Agazzi, President of the Italian Society for Logic and Philosophy of Science, who was co­ opted as an additional member of the Organizing Committee. This committee was otherwise identical with the Joint Commission, whose members were initially John Murdoch, John North, Arpad Szab6, Robert Butts, Jaakko Hintikka, and Vadim Sadovsky. Later, Erwin Hiebert and Lubos Novy were appointed as additional members.