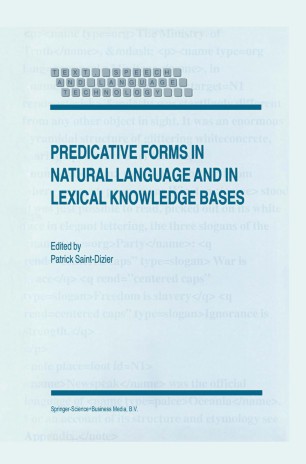 Predicative Forms in Natural Language and in Lexical Knowledge Bases

This volume is a selection of papers presented at a workshop entitled Predicative Forms in Natural Language and in Lexical Knowledge Bases organized in Toulouse in August 1996. A predicate is a named relation that exists among one or more arguments. In natural language, predicates are realized as verbs, prepositions, nouns and adjectives, to cite the most frequent ones. Research on the identification, organization, and semantic representa­ tion of predicates in artificial intelligence and in language processing is a very active research field. The emergence of new paradigms in theoretical language processing, the definition of new problems and the important evol­ ution of applications have, in fact, stimulated much interest and debate on the role and nature of predicates in naturallangage. From a broad theoret­ ical perspective, the notion of predicate is central to research on the syntax­ semantics interface, the generative lexicon, the definition of ontology-based semantic representations, and the formation of verb semantic classes. From a computational perspective, the notion of predicate plays a cent­ ral role in a number of applications including the design of lexical knowledge bases, the development of automatic indexing systems for the extraction of structured semantic representations, and the creation of interlingual forms in machine translation.