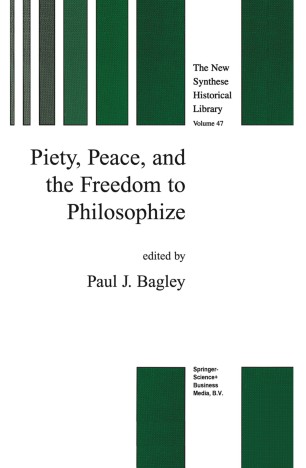 Piety, Peace, and the Freedom to Philosophize

The 11 essays collected here have been composed by members of the North American Spinoza Society. They exhibit the fruits of the research, investigation and erudition of an array of established scholars and newer students whose interpretations of Spinoza's philosophical doctrines are receiving critical acclaim.
This is the first collection in the English language dedicated exclusively to topics, problems or questions raised by the teachings found in Baruch Spinoza's Tractatus theologico-politicus.
Divided into the themes of piety, peace, and the freedom to philosophize, the essays treat Spinoza's views on faith and philosophy, miracles, the light of Scripture, political power, religion, the state, the body politic, the idea of tolerance, and philosophic communication, as well as his connections to Walter Benjamin, Blaise Pascal, David Hume, and his Jewish heritage.
Readership: An excellent collection for students and scholars studying Spinoza, the history of early modern philosophy, political philosophy, philosophy of religion, and those concerned with theologico-political questions.