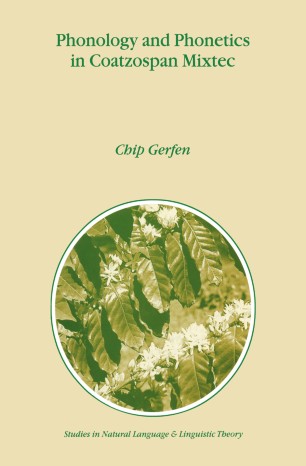 Phonology and Phonetics in Coatzospan Mixtec

BACKGROUND This book focuses on two major issues - vowel glottalization and nasalization - in the phonology and phonetics of Coatzospan Mixtec (henceforth CM). CM is an Otomanguean language currently spoken by roughly 2000 people (Small 1990) in the village of San Juan Coatzospan, which is located in the Sierra Mazateca of northern Oaxaca, Mexico.' Though Mixtec constitutes a major branch of the Otomanguean family, the so-called dialects are most appropriately viewed as distinct languages. According to Josserand (1982), there are at least 22 mutually unintelligible varieties of Mixtec. For its part, CM is among the most isolated. Located in the mountains, the village is surrounded entirely by Mazatec speaking communities. Only two other Mixtec languages exhibit over a 25% rate of mutual intelligibility with CM (Josserand 1982). And though it is not clear how this group of Mixtecs came to settle in what is a Mazatec speaking area, their isolation has given rise to special properties not shared by other varieties of the language. Major elements of both the phonology of vowel glottalization and nasalization under focus in this book are, to my knowledge, unique to CM among the Mixtec languages.