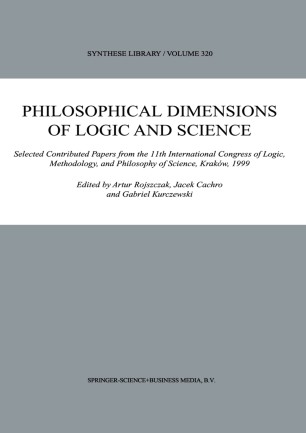 Selected Contributed Papers from the 11th International Congress of Logic, Methodology, and Philosophy of Science, Kraków, 1999

Philosophical Dimensions of Logic and Science is a collection of outstanding contributed papers presented at the 11th International Congress of Logic, Methodology, and Philosophy of Science held in Kraków in 1999. The Congress was a follow-up to the series of meetings, initiated once by Alfred Tarski, which aimed to provide an interdisciplinary forum for scientists, philosophers and logicians. The articles selected for publication in the book comply with that idea and innovatively address current issues in logic, metamathematics, philosophy of language, philosophy of science, and cognitive science, as well as philosophical problems of biology, chemistry and physics.
The volume will be of interest to philosophers, logicians and scientists interested in foundational problems of their disciplines.