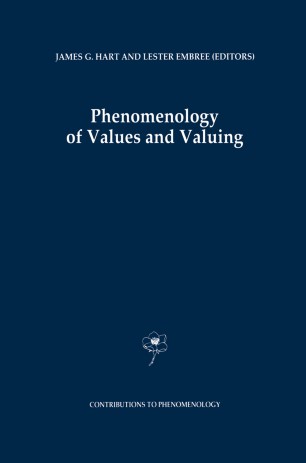 Phenomenology of Values and Valuing

Part of the Contributions to Phenomenology book series (CTPH, volume 28)

Although a key aspect of the phenomenological movement is its contribution to value theory (axiology) and value perception (almost all the major figures devoted a great part of their labors to these topics), there has been relatively little attention paid to these themes. This volume in part makes up for this lacuna by being the first anthology on value-theory in the phenomenological movement. It indicates the scope of the issues by discussing, e.g., the distinctive acts of valuing, openness to value, the objectivity of values, the summation and combination of values, the deconstruction of values, the value of absence, and the value of nature. It also contains discussions of most of the major representative figures not only in their own right but also in relationship to one another: Von Ehrenfels, Brentano, Scheler, Hartmann, Husserl, Heidegger, Schutz, and Derrida.