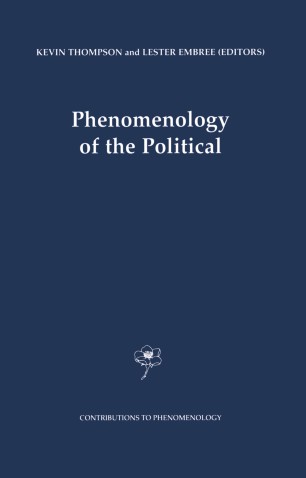 Phenomenology of the Political

Part of the Contributions to Phenomenology book series (CTPH, volume 38)

This volume is a collection of phenomenological investigations of the political domain. Its aim is to present recent examinations of political matters and to foster a renewal of this sort of inquiry in phenomenology generally. Although it has often gone unrecognized, investigations of this sort have been a part of the phenomenological project since its inception. Two phases can be identified: the first governed primarily by the methods of realistic and constitutive phenomenology, and the second under the guidance of existential and hermeneutical approaches. Standard accounts of the history of phenomenology begin, of course, with the publication of Husserl's Logische Untersuchungen (1900-1901) in which for the first time he publicly developed and applied his distinctively descriptive approach-the so-called method of eidetic analysis with its unique emphasis on the concept of evidence understood as intention fulfillment-to the fields of logical and mathematical systems. But those around him in Gottingen quickly saw the innovative character of this method and began employing it in a wide variety of other areas of research: literature, sociology, ethics, action theory, and even theology, for example.