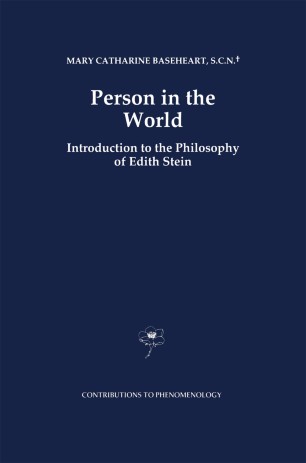 Person in the World

Introduction to the Philosophy of Edith Stein

Part of the Contributions to Phenomenology book series (CTPH, volume 27)

Edith Stein has become almost a legend in recent years largely because of her heroic personality and her death in Auschwitz at the hands of the Nazis. She is known also as an eminent German-jewish-Christian intellectual and feminist, but more in the realm of the sacred than of the secular. Both are essential to understanding her. To know the real Edith Stein one must have some knowledge of her as philosopher, for philosophy was central to her very being. For this reason the present work is designed to be of interest to the general reader as well as to philosophers. Many of the latter have given evidence of interest in Stein's phenomenology and may welcome an introduction that gives clues to its substance and quality. Those who knew Edith Stein personally and professionally--Edmund Husser!, Roman lngarden, Hedwig Conrad-Martius, Peter Wust, and other friends at the universities of G6ttingen and Freiburg--affirm her genius and her passionate pursuit of truth in philosophy. james Collins, distinguished American historian of philosophy, who discovered some of her works about the time she died, wrote that "we may expect critical studies on her philosophy to multiply rapidly with the issuance of her collected works and the recognition of her high philosophical genius."l The fact is that this has not happened, although fourteen of her major works have been published posthumously by Nauwelaerts and Herder, and many are available from other sources.