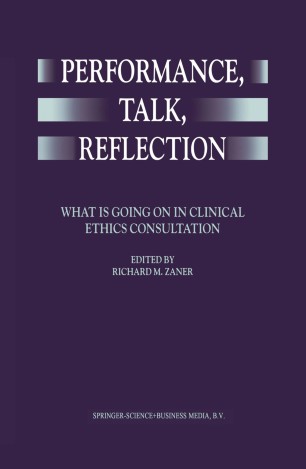 What is Going On in Clinical Ethics Consultation

In the following essays discussing clinical ethics consultation, three sorts of reflective writing are presented. The first is a description of a clinical ethics consultation, more generously detailed than most that have been published, yet obviously limited as a documentation of the experiences at its source. It is followed by three examples of a second kind in the probing commentaries by highly regarded figures in biomedical and clinical ethics - François Baylis, Tom Tomlinson, and Barry Hoffmaster. Finally, these are followed by a third variety of reflection in the form of responses to those three commentaries, by Bilton and Stuart G. Finder, and my Afterword - a further reflection on some of the issues and questions intrinsic to clinical ethics consultation and to these various essays.
The consultation itself was conducted by Bliton; but Finder not only assisted at one point (he is the `colleague' mentioned in Bliton's manuscript) but frequently participated in the discussions that are invariably part of our clinical ethics consultative practice in our Center for Clinical and Research Ethics at Vanderbilt University Medical Center. It was thus natural for Finder to participate in the response.
Each of these essays is fascinating and important on its own; together, however, they constitute a truly unusual and, we believe, very significant contribution that will hopefully figure prominently in subsequent discussions, and in shaping and deepening an endeavor - clinical ethics - still in much-needed search of its own discipline, method rationale and place in the domain of clinical practice more generally. This group of essays is also quite unique, addressing as it does the coherence of a form of practice - and, it must be emphasized, several forms of writing about as well as theoretical proposals for understanding that practice - whose current and future character remains very much in contention.
That a situation such as the one discussed here often provokes strong and passionate responses will be no surprise &endash; whether because of its relative novelty, its risky nature, the high stakes involved, or something else. It is in any event a striking feature of ethics consultations that the people directly or even indirectly involved tend at times to feel rather passionately about what is said (and not said), what is done (and not done), and what is then reported (or, it may be, left out). Even so, such energetic feelings, much less the candor of my colleague's response to such passion, are rarely if ever apparent from published reports. For this reason alone, a considerable debt of gratitude is surely owed to our commentators &endash; reflective and deliberative, yet passionate and forceful as each of them are.