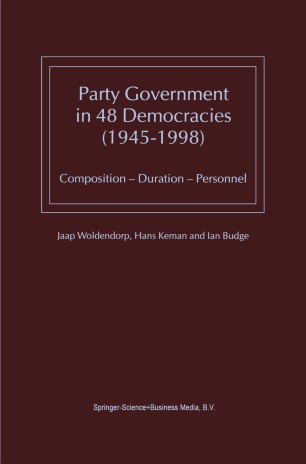 Since the 1980s, political scientists have developed a renewed interest in the study of political institutions, based on the assumption that "institutions matter" -that is, that formal governmental institutions and constitutional-legal rules (as well as informal institutions like parties and interest groups) are crucial determinants of the shape of politics and policy outcomes. In this respect, the "new institutionalism" resembles the "old institutionalism" of pre-behaviorist days, but the crucial difference between the two is that the new institutionalists are committed to systematic empirical testing of their hypotheses, at least in principle. In practice, however, especially in compara­ tive analyses, this goal has often been frustrated by the lack of reliable data for a large number of countries. Researchers have therefore usually been limited to testing their hypotheses with modest data sets collected for their own particular purposes. Of all of the political institutions, the executive branch of the government is by far the most important; it can be regarded as the irreducible core of government and the principal embodiment of political authority with specific powers that are not lodged elsewhere in the political system. Almost all countries in the world, and certainly all modem democracies, have an executive body called "government", "cabinet", or "administration" (as in the term "the Clinton administration") that has the main responsibility for running the country's public affairs.