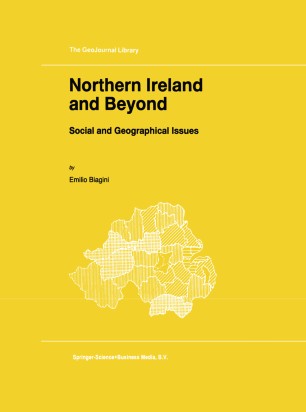 Northern Ireland and Beyond

Part of the The GeoJournal Library book series (GEJL, volume 33)

Northern Ireland's problems are rooted in physical and historical geography: small resource base, peripheral location, violent conquest, repression and ruthless emargination of the native population by the Protestant settlers. At the time of partition, many areas already had a Catholic majority, and the Catholic population is increasing faster, thereby undermining the Protestant position. Britain gains no advantage by keeping Northern Ireland. Nevertheless, this solution is not going to be cheap, not merely because of opposition by Protestant loyalists, but also because of the economic weakness of both Irelands.
Unlike other books on the subject, this one goes to the heart of the matter: Britain would be serving her own interest by easing reunification of Ireland, albeit gradually and cautiously. In this perspective, the conclusion is that history is inexorably moving beyond Northern Ireland.
Audience: European Community administrators and planners, diplomats, politicians, students in Political Science, Economics, History and Geography.