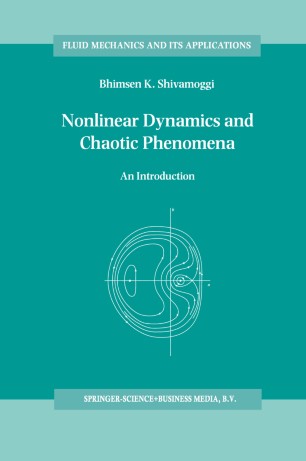 Part of the Fluid Mechanics and Its Applications book series (FMIA, volume 42)

FolJowing the formulation of the laws of mechanics by Newton, Lagrange sought to clarify and emphasize their geometrical character. Poincare and Liapunov successfuIJy developed analytical mechanics further along these lines. In this approach, one represents the evolution of all possible states (positions and momenta) by the flow in phase space, or more efficiently, by mappings on manifolds with a symplectic geometry, and tries to understand qualitative features of this problem, rather than solving it explicitly. One important outcome of this line of inquiry is the discovery that vastly different physical systems can actually be abstracted to a few universal forms, like Mandelbrot's fractal and Smale's horse-shoe map, even though the underlying processes are not completely understood. This, of course, implies that much of the observed diversity is only apparent and arises from different ways of looking at the same system. Thus, modern nonlinear dynamics 1 is very much akin to classical thermodynamics in that the ideas and results appear to be applicable to vastly different physical systems. Chaos theory, which occupies a central place in modem nonlinear dynamics, refers to a deterministic development with chaotic outcome. Computers have contributed considerably to progress in chaos theory via impressive complex graphics. However, this approach lacks organization and therefore does not afford complete insight into the underlying complex dynamical behavior. This dynamical behavior mandates concepts and methods from such areas of mathematics and physics as nonlinear differential equations, bifurcation theory, Hamiltonian dynamics, number theory, topology, fractals, and others.