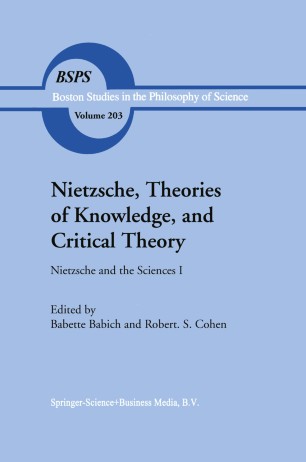 Nietzsche and the Sciences I

Part of the Boston Studies in the Philosophy of Science book series (BSPS, volume 203)

Nietzsche, Theories of Knowledge, and Critical Theory, the first volume of a two-volume book collection on Nietzsche and the Sciences, ranges from reviews of Nietzsche and the wide variety of epistemic traditions - not only pre-Socratic, but Cartesian, Leibnizian, Kantian, and post-Kantian -through essays on Nietzsche's critique of knowledge via his critique of grammar and modern culture, and culminates in an extended section on the dynamic of Nietzsche's critical philosophy seen from the perspective of Habermas and critical theory. This volume features a first-time English translation of Habermas's afterword to his own German-language collection of Nietzsche's Epistemological Writings.