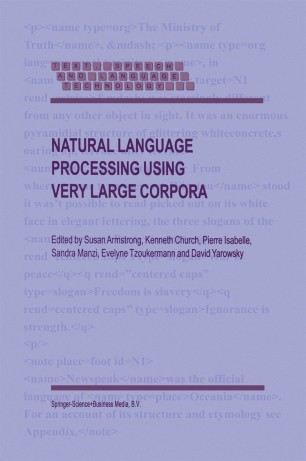 ABOUT THIS BOOK This book is intended for researchers who want to keep abreast of cur­ rent developments in corpus-based natural language processing. It is not meant as an introduction to this field; for readers who need one, several entry-level texts are available, including those of (Church and Mercer, 1993; Charniak, 1993; Jelinek, 1997). This book captures the essence of a series of highly successful work­ shops held in the last few years. The response in 1993 to the initial Workshop on Very Large Corpora (Columbus, Ohio) was so enthusias­ tic that we were encouraged to make it an annual event. The following year, we staged the Second Workshop on Very Large Corpora in Ky­ oto. As a way of managing these annual workshops, we then decided to register a special interest group called SIGDAT with the Association for Computational Linguistics. The demand for international forums on corpus-based NLP has been expanding so rapidly that in 1995 SIGDAT was led to organize not only the Third Workshop on Very Large Corpora (Cambridge, Mass. ) but also a complementary workshop entitled From Texts to Tags (Dublin). Obviously, the success of these workshops was in some measure a re­ flection of the growing popularity of corpus-based methods in the NLP community. But first and foremost, it was due to the fact that the work­ shops attracted so many high-quality papers.