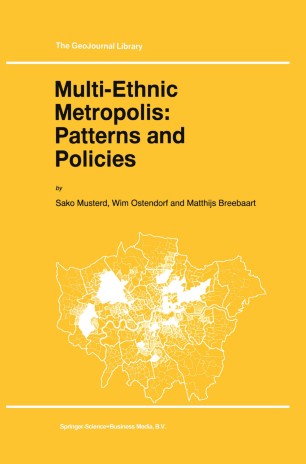 Part of the The GeoJournal Library book series (GEJL, volume 43)

Multi-Ethnic Metropolis is based on international comparative research on ethnic segre­ gation patterns and policy reactions at local and national level. The objective was to achieve a broader, European perspective. For the acquisition of the information on which this book is based, we relied heavily on our colleagues abroad and their network of relations, since a great deal of factual data and information on the policies pursued is usually not available in a freely accessible form and can only be obtained through persons who know their way around. Eventually, in­ formation was provided by about seventy people (data administrators, policymakers at local and state level, politicians, academic researchers, representatives of interest groups, etc. ). The names of all people that contributed to this study are mentioned in the list of persons who were interviewed. Without wishing to wrong all these people, we especially want to thank the key informants who acted as intermediaries for following contacts. In alphabetical order, these are the following persons: Dr. Lars-Erik Borgegard (Stockholm}, Prof. Chris Hamnett (London), Dr. Herve Vieil­ lard Baron (Paris}, Prof. dr. Chris Kesteloot (Brussels}, Prof. dr. Bob Murdie (Toronto}, Prof. Ceri Peach (London), Prof. Phil Rees (London and Manchester}, Prof Brian Rob­ son (Manchester) and Prof. GUnther Glebe (Dusseldorf and Frankfurt). Furthermore we owe thanks to Prof. Herman van der Wusten, who took care of the in­ terviews in 'Paris', which was an unruly case.