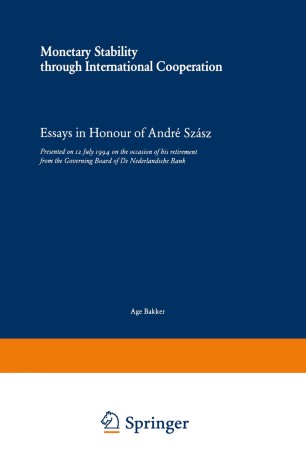 Essays in Honour of André Szász. Presented on 12 July 1994 on the occasion of his retirement from the Governing Board of De Nederlandsche Bank

Monetary Stability through International Cooperation contains essays written by high ranking policy makers in the field of central banking and international finance, written in honour of André Szász, who has been Executive Director of De Nederlandsche Bank since 1973, responsible for international monetary relations. Colleagues from several other central banks, from finance ministries and from international institutions pay tribute to him by analysing the conditions fostering European as well as global monetary stability. The book provides an inside view of the thinking of monetary officials at the turn of 1993/1994, when the currency turmoil in the ERM of mid-1993 had subsided and views on its implications for exchange rate management and, more generally, for European integration were taking shape. Topics include exchange rate stabilisation, policy coordination and central bank independence. A second section, on the international monetary system, includes essays on the policy implications of present day dynamic financial markets as well as the role of the IMF. This book, written by `insiders for an insider', provides valuable insights to those who are interested in contemporary international monetary relations.