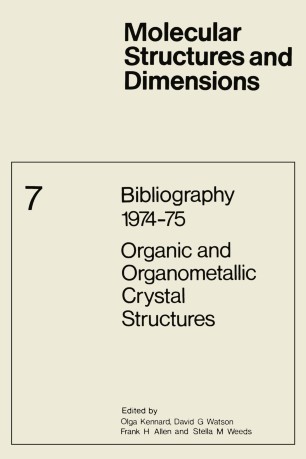 This volume is the seventh classified bibliography of organic and organometallic crystal structures prepared by the Crystallographic Data Centre, University Chemical Laboratory, Cambridge, and published jointly with the International Union of Crystallography. The first six volumes covered the years 1935-1974. The present volume provides references principally to compounds whose struc­ tures were reported in the literature during 1974-1975. A few structures published prior to 1974 and omitted from the previous volumes are also included. There are three cumulative indexes in the present volume: formula, transition metal and author indexes. All three cover the period 1935- 1975 and give references to entries in Vols. 1-7. The bibliography and indexes were prepared, checked and printed by computer techniques described in the previous volumes. Magnetic tapes of the seven volumes are available and anyone interested should contact the Centre for further details. In the present volume we have continued the special arrangement for literature search with the Centre National de Ia Recherche Scientifique, Paris, France. Under this arrangement reprints of papers containing crystallographic data are sent directly to the Crystal­ lographic Data Centre, Cambridge, at the same time as they are sent out to abstractors preparing material for the Bulletin Signaletique.