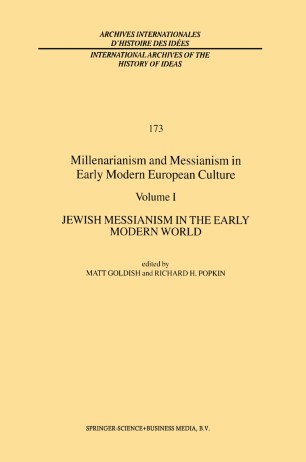 Volume I: Jewish Messianism in the Early Modern World

The earliest scientific studies of Jewish messianism were conducted by the scholars of the Wissenschaft des Judentums school, particularly Heinrich Graetz, the first great Jewish historian of the Jews since Josephus. These researches were invaluable because they utilized primary sources in print and manuscript which had been previously unknown or used only in polemics. The Wissenschaft studies themselves, however, prove to be polemics as well on closer inspection. Among the goals of this group was to demonstrate that Judaism is a rational and logical faith whose legitimacy and historical progress deserve recognition by the nations of Europe. Mystical and messianic beliefs which might undermine this image were presented as aberrations or the result of corrosive foreign influences on the Jews. Gershom Scholem took upon himself the task of returning mysticism and messianism to their rightful central place in the panorama of Jewish thought. Jewish messianism was, for Scholem, a central theme in the philosophy and life of the Jews throughout their history, shaped anew by each generation to fit its specific hopes and needs. Scholem emphasized that this phenomenon was essentially independent of messianic or millenarian trends among other peoples. For example, in discussing messianism in the early modern era Scholem describes a trunk of influence on the Jewish psyche set off by the expulsion from Spain in 1492.