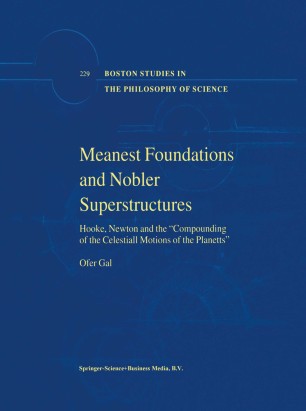 Hooke, Newton and the “Compounding of the Celestiall Motions of the Planetts”

Part of the Boston Studies in the Philosophy of Science book series (BSPS, volume 229)

This book is a historical-epistemological study of one of the most consequential breakthroughs in the history of celestial mechanics: Robert Hooke's (1635-1703) proposal to "compoun[d] the celestial motions of the planets of a direct motion by the tangent & an attractive motion towards a centrat body" (Newton, The Correspondence li, 297. Henceforth: Correspondence). This is the challenge Hooke presented to Isaac Newton (1642-1727) in a short but intense correspondence in the winter of 1679-80, which set Newton on course for his 1687 Principia, transforming the very concept of "the planetary heavens" in the process (Herivel, 301: De Motu, Version III). 1 It is difficult to overstate the novelty of Hooke 's Programme • The celestial motions, it suggested, those proverbial symbols of stability and immutability, werein fact a process of continuous change: a deflection of the planets from original rectilinear paths by "a centraU attractive power" (Correspondence, li, 313). There was nothing necessary or essential in the shape of planetary orbits. Already known to be "not circular nor concentricall" (ibid. ), Hooke claimed that these apparently closed "curve Line[ s ]" should be understood and calculated as mere effects of rectilinear motions and rectilinear attraction. And as Newton was quick to realize, this also implied that "the planets neither move exactly in ellipse nor revolve twice in the same orbit, so that there are as many orbits to a planet as it has revolutions" (Herivel, 301: De Motu, Version III).