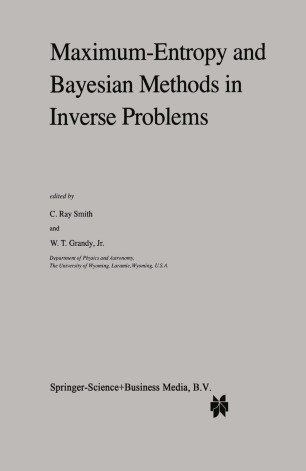 This volume contains the text of the twenty-five papers presented at two workshops entitled Maximum-Entropy and Bayesian Methods in Applied Statistics, which were held at the University of Wyoming from June 8 to 10, 1981, and from August 9 to 11, 1982. The workshops were organized to bring together researchers from different fields to critically examine maxi­ mum-entropy and Bayesian methods in science, engineering, medicine, oceanography, economics, and other disciplines. An effort was made to maintain an informal environment where ideas could be easily ~xchanged. That the workshops were at least partially successful is borne out by the fact that there have been two succeeding workshops, and the upcoming Fifth Workshop promises to be the largest of all. These workshops and their proceedings could not have been brought to their final form without the substantial help of a number of people. The support of David Hofmann, the past chairman, and Glen Rebka, Jr. , the present chairman of the Physics Department of the University of Wyoming, has been strong and essential. Glen has taken a special interest in seeing that the proceedings have received the support required for their comple­ tion. The financial support of the Office of University Research Funds, University of Wyoming, is gratefully acknowledged. The secretarial staff, in particular Evelyn Haskell, Janice Gasaway, and Marce Mitchum, of the University of Wyoming Physics Department has contributed a great number of hours in helping C. Ray Smith organize and direct the workshops.