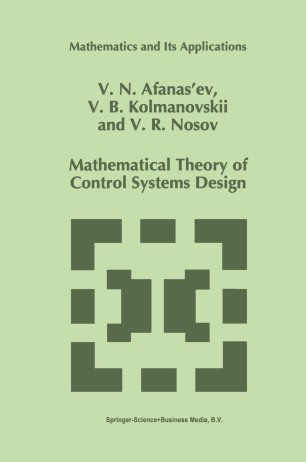 Part of the Mathematics and Its Applications book series (MAIA, volume 341)

Give, and it shall be given unto you. ST. LUKE, VI, 38. The book is based on several courses of lectures on control theory and appli­ cations which were delivered by the authors for a number of years at Moscow Electronics and Mathematics University. The book, originally written in Rus­ sian, was first published by Vysshaya Shkola (Higher School) Publishing House in Moscow in 1989. In preparing a new edition of the book we planned to make only minor changes in the text. However, we soon realized that we like many scholars working in control theory had learned many new things and had had many new insights into control theory and its applications since the book was first published. Therefore, we rewrote the book especially for the English edition. So, this is substantially a new book with many new topics. The book consists of an introduction and four parts. Part One deals with the fundamentals of modern stability theory: general results concerning stability and instability, sufficient conditions for the stability of linear systems, methods for determining the stability or instability of systems of various type, theorems on stability under random disturbances.