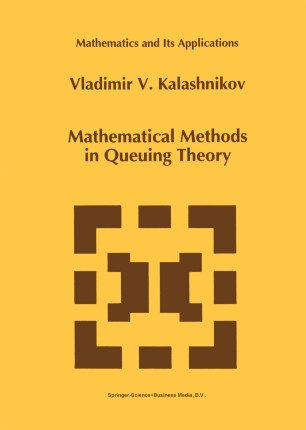 Part of the Mathematics and Its Applications book series (MAIA, volume 271)

The material of this book is based on several courses which have been delivered for a long time at the Moscow Institute for Physics and Technology. Some parts have formed the subject of lectures given at various universities throughout the world: Freie Universitat of Berlin, Chalmers University of Technology and the University of Goteborg, University of California at Santa Barbara and others. The subject of the book is the theory of queues. This theory, as a mathematical discipline, begins with the work of A. Erlang, who examined a model of a telephone station and obtained the famous formula for the distribution of the number of busy lines which is named after him. Queueing theory has been applied to the study of numerous models: emergency aid, road traffic, computer systems, etc. Besides, it has lead to several related disciplines such as reliability and inventory theories which deal with similar models. Nevertheless, many parts of the theory of queues were developed as a "pure science" with no practical applications. The aim of this book is to give the reader an insight into the mathematical methods which can be used in queueing theory and to present examples of solving problems with the help of these methods. Of course, the choice of the methods is quite subjective. Thus, many prominent results have not even been mentioned.